County Managers Learn About Redistricting and Reapportionment at Quarterly Meeting 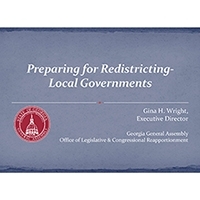 The NEGRC PGS Division facilitates quarterly county managers’ meetings, offering a platform for interjurisdictional coordination, a sharing of information, and for the managers to hear from professionals on specific topics of interest. In February 2021, the group heard from Gina Wright, Executive Director of the Georgia Legislative & Congressional Reapportionment Office, about the upcoming redistricting and reapportionment cycles. Redistricting and reapportionment are performed following the completion of each decennial census.

Reapportionment is the reallocation of the 435 U.S. Congressional seats based on population shifts in the census. Redistricting is the redrawing of district boundary lines. Districts change after every census, reflecting the population shifts that have occurred over the previous 10 years (all districts are intended to have as close to equal populations as practicable). Legally, districts must comply with both the U.S. and state constitution, the Voting Rights Act of 1965, and the Equal Protection Clause of the 14th Amendment (one person, one vote). Redistricting principles include compactness, contiguity, respecting political boundaries, preserving communities of interest, and the protection of incumbents. Certain principles like contiguity and the protection of incumbents have non-negotiable elements, while others are subject to tradeoffs. “Contiguity” demands that all of the district touch itself (no islands); “protection of incumbents” means one cannot redraw their district such that they would have to run for re-election before their original term ends. The ideal district is compact and contiguous, aligns with the political boundaries of other jurisdictions and districts (e.g. federal, state, and local districts share boundaries), avoids breaking up communities of interest (e.g. neighborhoods with common ethnic, cultural, historic, economic, or public policy bonds), and does not require incumbents to move to stay within their district or run for re-election before their original term is over. Tradeoffs among these principles are common.

Due to the delayed Census 2020 data collection during the pandemic, this reapportionment and redistricting cycle will also be delayed. 2020 Census data will be released over the upcoming spring and late-summer of 2021, and public hearings will also be held during this time. New maps will be generated and finalized during the Fall of 2021. City Councils can redistrict under the principle of Home Rule, but all other local maps must be approved by the state.

Local governments must first request one of their state senators or representatives to sponsor their map. Local governments have several options for redrawing their maps: by using an in-house GIS team, working directly with the State Reapportionment Office (at no cost to the local government), or using other consultants and groups like regional commissions. If the local government chooses not to use the Reapportionment Office, the map must be submitted to the Office for technical review. After certification of the map, the local body adopts the new map and notifies their sponsor that it is ready for legislative approval. The map is not considered official until the legislature and governor have passed and signed legislation approving the map.

For questions about 2020 Census data or for NEGRC technical assistance with redistricting, contact Jon McBrayer, NEGRC GIS Specialist, at jmcbrayer@negrc.org.

« Back to All News